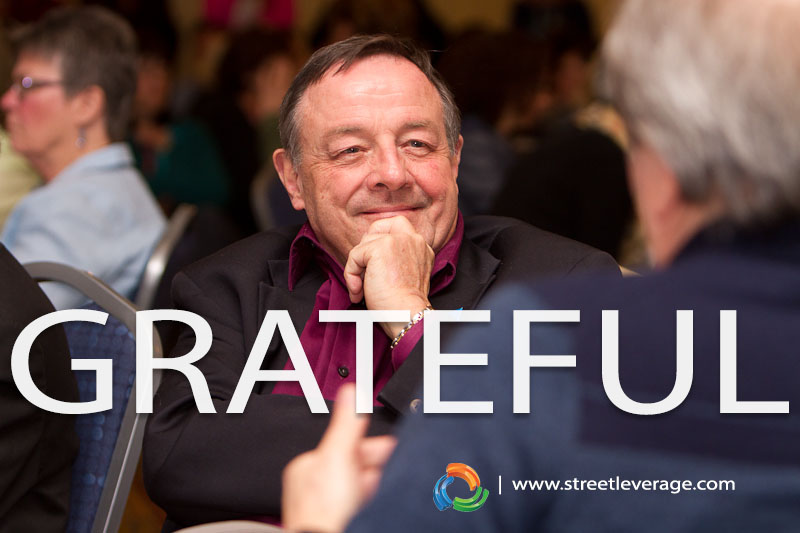 The StreetLeverage story is YOUR story.

There is no way to tell the StreetLeverage story without attempting to identify a large number of people and to rehearse every small, seemingly insignificant act of generosity which, when woven together, creates a multiplier which has compounded these acts into something beautiful.

This generosity open doors for us to learn, enjoy and share this work. It allows us to connect with amazingly talented, committed, inspired and inspiring people.

Generosity, large and small, is the connective tissue which binds everything together at StreetLeverage. Every event attendee and volunteer, every fully formulated post and idea shared, and every reader who likes, shares or tweets ideas to their peers and co-workers, demonstrates that spirit. With each decision, offer, invitation, open door and open mind, a space has been created for opportunity, for discovery, for expanding possibilities in the field of sign language interpreting.

We are grateful to all the individuals who participate in and support the StreetLeverage endeavor. Without your contributions, this task would be insurmountable.

It is with grateful hearts that StreetLeverage says a hearty and heartfelt, “Thank You!”

The Power of “Thank You”: Sign Language Interpreters and Gratitude by Jean Miller

Sign Language Interpreters and the Karma of Gratitude by Brandon Arthur 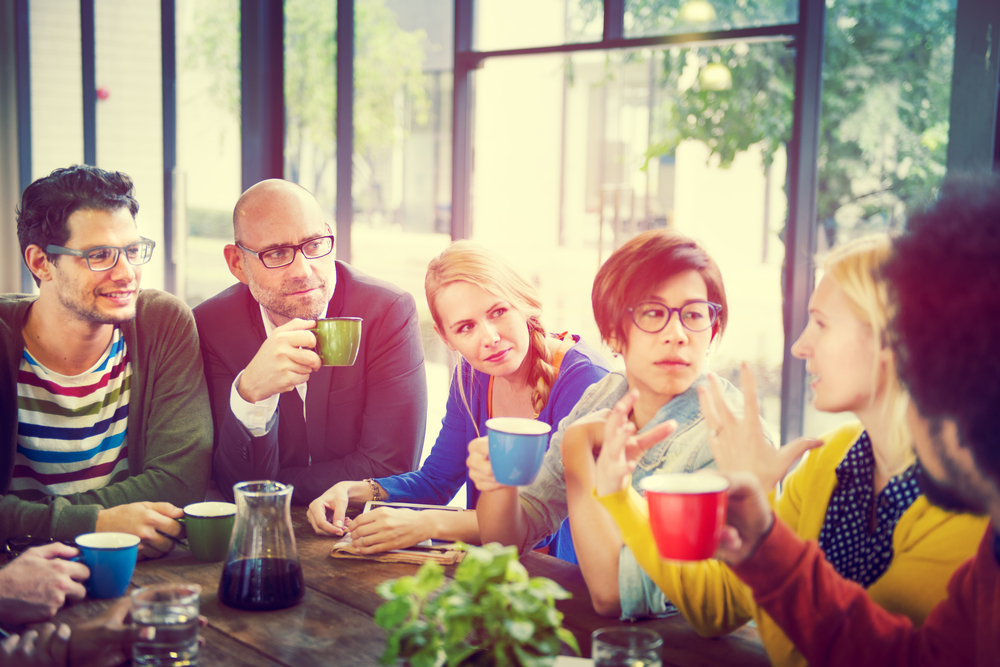 Sign language interpreters are exposed to language variation on a daily basis. Interpreters and programs supporting interpreter education must cooperate with the Deaf community to adopt and adapt to the evolving stylings of native signers.

How We Look at Language

There are two widespread approaches to variation within languages: prescriptivism and descriptivism1. Prescriptivists approach language with a predetermined notion of what rules ought to govern a language. Often these rules are taken from some supposedly pure or superior form of language. Prescriptivists have looked at English, for instance, and insisted on the use of “whom” in object position rather than “who,” on distinguishing between uses of “fewer” and “less,” and on using “from,” and not “than,” as the preposition that accompanies the adjective, “different.”

Descriptivists, on the other hand, approach language variation as it occurs in actual discourse. Instead of seeking to impose rules on language use based on some predetermined agenda or formula, descriptivists simply observe without judgment how the language is used by native speakers. Rather than assuming that one dialect is superior to another, descriptivists note that all varieties of language operate based on a number of equally valid, complex rules.

Linguists generally approach linguistic variation as descriptivists. These scientists insist that there is no objective reason to regard one set of rules as superior to another. For instance, dialects of English that use the past participle “have saw” are not objectively inferior to dialects that use “have seen.” Many textbooks teach the form “have seen” for socio-political reasons. That is, the people who have power and wealth impose their language variety on others by publishing grammar books that espouse the rules of their variety and by discriminating against speakers whose dialects do not conform. As a result, people assume that one dialect is “correct” or more rule-governed than the dialects of less powerful groups who do not have the means to publish grammar books and represent their own dialects in media and other institutions of power. In this way, the language of the establishment becomes a norm that oppresses and suppresses legitimate dialect variation.

Sign language interpreters should act as linguistic descriptivists. That is, interpreters should look at language as it is used by native signers in the Deaf community and attempt to emulate that language in their target language production. Unfortunately, there is a trend toward linguistic prescriptivism in interpreter education and in the sign language interpreting community. These prescriptivists focus on some notion of ASL “purity” and how they assume ASL should be signed. While, on the face of it, it seems that such a motivation would be praiseworthy, in reality this approach frames the Deaf community’s language as an object of judgment with the interpreter serving as judge. Prescriptivists lament the supposedly poor and degraded quality of ASL usage today and too often situate themselves as “better” signers than the Deaf clients they serve.

Three caveats are in order. First, I am not asserting that everything every Deaf person signs is consistent with ASL grammatical norms. For instance, there are many non-native Deaf signers who use ASL but who did not internalize its grammatical rules growing up. As a result, they cannot be said to adequately represent legitimate dialect varieties of ASL. Though their language use should be respected, they are not ideal linguistic models of native ASL use. Secondly, everyone has bits of language that are idiosyncratic and not representative of linguistic norms. Thus, simply because one native signer uses a particular expression, that expression should not be considered de facto normative and applied widely by sign language interpreters. Thirdly, sign language interpreters who work in educational settings must consider the unique situation of Deaf students whose language is still developing.  Educational interpreters should not limit their usage to that which is common in the particular mainstream setting in which they work. Instead, they should consider the wider Deaf community’s usage when choosing signs and grammatical options. Just as a hearing teacher introduces English structures and vocabulary that are more advanced than those commonly used by hearing students, so should an interpreter include ASL structures that are representative of Deaf adult populations.

Prescriptivism in Our Work

The native signing community serves as the normative standard for the language, and non-native interpreters should not impose our own judgments on the signs and syntactic structures used in the community. To do so is to impose a prescriptivism that is inappropriate to one’s role as a sign language interpreter. I see this prescriptivism in several areas:

Descriptivism as a Route to Language Respect

Interpreters and interpreter education must remain rooted in the Deaf community. The ideas addressed by Eileen Forestal and Sherry Shaw in their CIT presentation, ”Breaking the Mold of Tokenism”, would aid in the formation of a respectful interpreter mindset regarding the ownership of ASL. The language we use is not an arbitrary entity to be preserved for ourselves according to the rules we prefer. Rather, ASL is a living language belonging to the community we serve. So I invite you to approach each linguistic encounter as an opportunity to observe and to learn from what you see. When we adopt descriptivism as our approach to language, we avoid the burdensome negativity of the judge and can live in the open, engaging world of the eternal language learner. 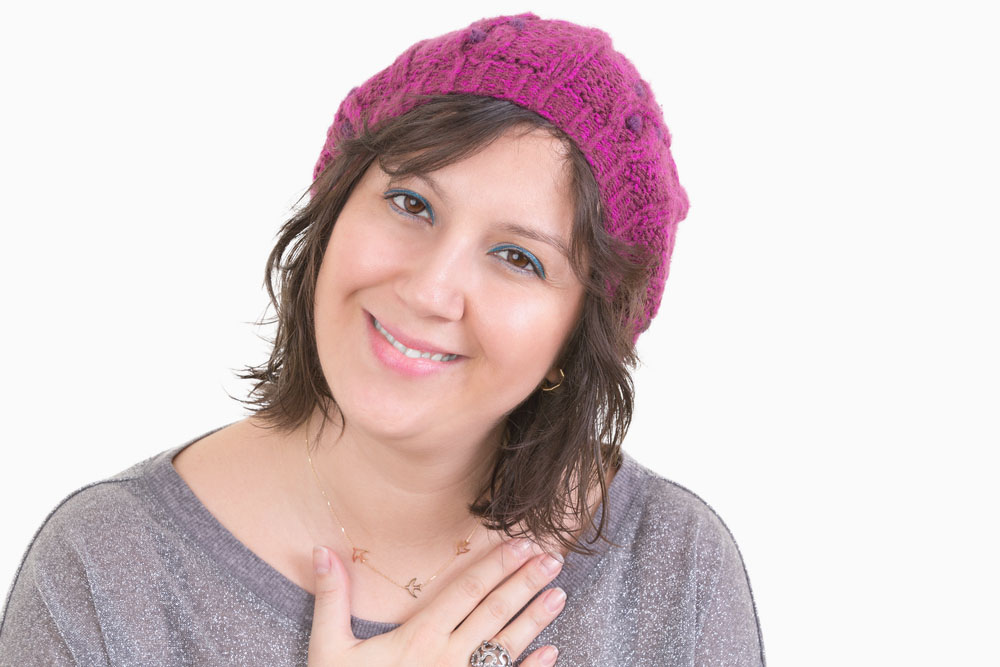 Sincere expressions of gratitude positively impact both giver and receiver. Creating an intentional gratitude practice could benefit sign language interpreters and the profession.

As the days grow darker with the change of the seasons, there is a sense of despair in many arenas of the sign language interpreting field; rough waters on the national front, a swiftly-changing field of work, expressions of dissatisfaction from those who employ our services the most. It almost feels like the perfect storm. One thought keeps those negative thoughts at bay: could we transform our relationships with the Deaf Community and other sign language interpreters if we expressed our thanks more regularly?

My thoughts here are not original. Brandon Arthur talked about Sign Language Interpreters and the Karma of Gratitude back in 2011. Tammera Richards included the idea in her article, #Doable: How Sign Language Interpreters Restore Relationships with the Deaf Community. If you do a blog search on StreetLeverage, many of the contributors mention gratitude in their articles. It is not a foreign concept, but my sense is that we need to be more intentional, and we need to do more. The darker the time, the more we need the light of our friends and supporters to show us the way.

Sometimes, a simple smile, a “hello”, or a friendly wave of acknowledgment when I’m on the phone is enough to make my day. Each of these gestures has made an impact on me, particularly when I might be struggling in some way. When I remember how meaningful it is to receive these expressions of gratitude, it strengthens my resolve to reach out and share them with others.

After the Community Forum at the RID National Conference this year, I did something I rarely do. I approached two of the speakers and thanked them for sharing their stories. For me, that session was the most memorable of the whole conference. I was moved to tears by the courage and strength of those who stood on the stage that night. While I usually convince myself that presenters don’t need to hear me tell them how great they are, I couldn’t contain my gratitude. The conversations that ensued were so heartfelt and so meaningful to me; I carry them with me still. Perhaps it was more beneficial for me than for them, I don’t know. What I do know is that when I walked away that night, I was inspired to be braver. To take more opportunities to thank those who inspire, support, teach and inform my work.

In 2006, one of my favorite authors, Patti Digh, offered a challenge on her blog: “Create a list of 37 people who have helped you and write just one or two sentences that captures the gift they have given you.”2 I took that challenge and the experience was profound. In 2013, she posted an entry in her web series, “your daily rock” titled, “write a thank you note.” In that short missive, she states:

“For four years now, I have written a thank you note every morning. It has changed how I see the world. I look for opportunities to thank, not opportunities to criticize. It is not new skills we need to change our lives–it is new mindsets.”3

The idea of changing mindsets resonates with me personally, and I have been wondering how it could impact our professional community, as well. I hope you will consider exploring a new mindset with me.

A November Challenge: Show Your Gratitude

As the month of November begins, as Thanksgiving approaches, and as many of us await the findings of the RID Risk Assessment, I’d like to challenge StreetLeverage readers to show your gratitude in a focused, purposeful way.

There are a million ways to show your gratitude. Here are some ideas:

Not convinced? Here is an article about the benefits of gratitude.

I hope you will join me in a month of gratitude. I’d love to hear about your experiences, transformations and epiphanies. I know it won’t solve the problems of our field, but it might be a step toward mending or strengthening relationships and partnerships, which may create the momentum to address some of the larger challenges that lay ahead for practitioners and the field in general. Or, it might just make you feel good.