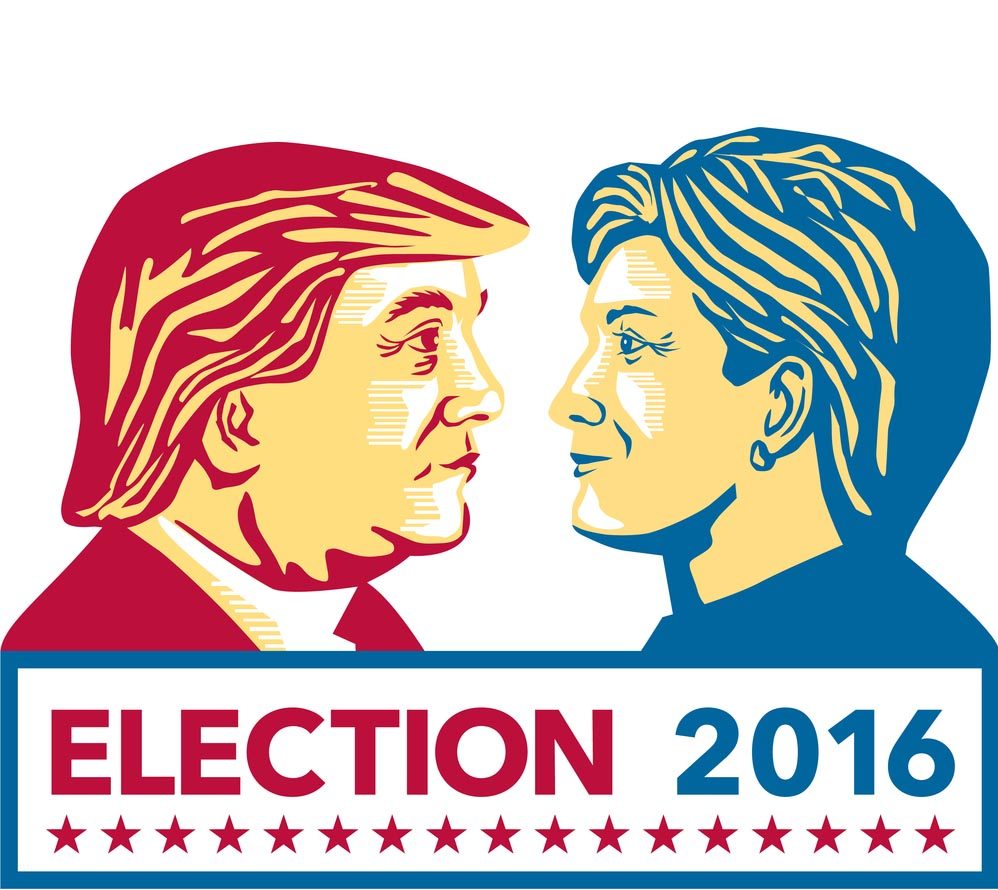 Personal politics aside, the 2016 Presidential election is an opportunity to view politics through a “sign language interpreter lens”. Using this angle, Cassie Lang examines the candidates’ views on various issues.

With the presidential election just a few days away, and considering this all began over two years ago (!) you might find yourself in one of two categories: fed up and despondent over the state of politics, or freaked and obsessed with the latest breaking scandal and poll results. Maybe you’re just trying to keep track of the latest sign for TRUMP while interpreting, or monitoring those facial meta-comments whenever the election comes up. With it now possible to watch presidential debates in a movie theater complete with a free drink, and nearly everything being labeled “unprecedented,” the tongue-in-cheek ending line to the SNL debate spoof, “Just to remind everyone at home, this was the presidential debate” seems to be further evidence of a populace that just wishes this circus would pack up the tent and go home.

Is it just me, or does anyone long for days of political yore: some nice, boring analysis of policy statements, voting records and speech fact checking? During a campaign when most voters have already decided who they’re voting for or against (polls estimate only 2-12% are undecided), disillusioned though they may be about it, it just might seem an exercise in futility to dig into the issues facing America today that have so briefly garnered media attention.

The phrase “identity politics” rings true: we vote for candidates we feel most closely represent ourselves and our interests. With a nod to the latest buzz word but valid cultural construct, intersectionality, I’d like to share what I’ve learned looking at the candidates from the identity lens of a sign language interpreter. This focuses on the major party nominees, but information is also available on Libertarian Gary Johnson or the Green Party’s Jill Stein.

So what do we as interpreters care about? Using myself as an example, I consider things like out of pocket healthcare costs and insurance policies available on the exchanges, since I’ve been full time in private practice. I’m not incorporated nor do I own an interpreting agency, but I do work for several, so I also wanted to learn what if any impact this election may have on small business owners. I also have an eye on education: would massive budget cuts to public education have an impact on funding for special education and educational interpreters? Although the ADA remains largely a bulwark for Deaf-related issues regardless of party administration, I also have concerns regarding the politics surrounding bi-(or multi-) lingualism, minority cultures, and disability issues in order to keep moving forward on things like accessibility and equality instead of reverting to the back foot.

Issues closely tied to sign language interpreters and the people we work with haven’t gotten the coverage that perhaps foreign policy or personality have, so I did my best to compile sources. Here’s what I found:

Hillary Clinton supports the Common Core Standards and publicly funded early childhood education, and wants to make public higher education “debt-free.” She also wants to reduce the number of standardized tests. She acknowledges problems with charter schools having the ability to be more selective about their students but does support a school voucher program for school choice (NPR, 2016).

Donald Trump does not support the Common Core or making public higher education debt-free, and is unclear on his position of early childcare education, although agrees with Clinton in reducing standardized testing. He supports a voucher program for private and charter schools, specifically proposing to cut $20 billion federal dollars from public schools. If states contribute another $100M each, then those funds combined would give “every student living in poverty” $12,000 toward school choice. States who have more private and charter schools are more likely to get back the subtracted federal funds and if they make a commitment to supporting non-public options. Trump also has a more negative view on teachers’ unions and believes teacher pay should be influenced by evaluations. (NPR, 2016).

Clinton supports the Affordable Care Act as a public insurance option for those not getting insured through their employer or those who are self-employed, and pledges to lower out-of-pocket prescription drug costs. She also wants to give states incentives to expand Medicaid coverage for low-income Americans and allow enrollment in exchanges regardless of immigration status.

Trump wants to end the Affordable Care Act and replace it with optional Health Savings Accounts (where an individual can choose to deposit a portion of pre-tax income into a yearly account for approved health care costs). He also wants to allow insurance companies to sell policies across state lines, minimizing or eliminating state regulation over the companies. He proposes to give state lawmakers more discretion over what federal Medicaid grants will cover.

Clinton encourages Americans to become bilingual, does not believe English should be the official language of the United States, and opposes discrimination towards those who do not speak English (2008 debate). She voted “No” on getting rid of legal challenges to English-only job rules (March 2008).

Trump criticized Jeb Bush for speaking Spanish on the campaign trail and was quoted as saying, “We’re a nation that speaks English, and I think that while we’re in this nation we should be speaking English…it’s more appropriate.”

Clinton has been quoted for needing to recognize the positive impact people with disabilities have had on “changing things for the better” in America. In her position statement, she vows to continue to support the ADA, expand support for those with disabilities to “live in integrated community settings”, “improve access to meaningful, gainful employment” and provide tax breaks for families with individuals who have disabilities. Her website cites her effort when Secretary of State for the US to join the United Nations Convention on the Rights of Persons with Disabilities.

She spoke specifically at an event in September on creating more economic opportunity for people with disabilities, such as eliminating rules allowing the exception to pay those with disabilities below minimum wage.

In her answers to RespectAbility’s Report Questionnaire, Clinton details her votes for increased funding for IDEA, her introduction of the Count Every Vote Act to ensure accessible voting, her commitment to work with law enforcement on cultural understanding for persons with disabilities along with supporting the use of police body cameras, and her campaign’s efforts to make her website, media and interactions with voters accessible. Her response also mentioned her support of Bill Clinton’s $3M in grants to expand screenings such as the newborn hearing screening, and her first-ever appointment when Secretary of State of a Special Advisor for International Disability Rights to construct a plan to promote disability rights internationally.

Clinton also has an intern for her campaign who is Deaf.

Trump’s campaign website has no position statements on disability. After he made contorted arm movements while speaking negatively about a reporter with a disability at a rally last November, allegations of him mocking the reporter, including from the New York Times became widespread. He later denied this and was quoted saying, “I would never say anything bad about a person that has a disability. I swear to you it’s true, 100 percent true. . . . Who would do that to [the] handicapped? I’ve spent a lot of money making buildings accessible.” In citing adding accessibility to his buildings as the explanation for his actions being misconstrued, it is unclear whether his purported building improvements were going above and beyond the ADA, or simply coming into compliance with what has been federal law since 1990.

Trump was reported to use derogatory terms and behavior toward Marlee Matlin. Her response here.

Clinton supports helping small businesses get off the ground with access to capital and deferring student loan payments, streamlining licensing, simplifying tax filing rules, incentivizing health care benefits for business with up to 50 employees, providing training and mentoring to business owners and making sure small businesses get paid for services rendered.

Trump proposes to lower the business tax rate for corporate income from 35 percent to 15 percent for companies labeled “C” corporations (under 8% of small businesses benefit).

According to a recent Bank of America survey, 74% of small business owners are concerned that health care costs will impact their business, and 79% feel that the effectiveness of government leaders, in general, will affect their business in the next 12 months. Sixty-seven percent of respondents are voting based on personal perspectives as opposed to business.

It Matters in the End

Political polarization in the US is at its highest point in the last twenty years. And our perception of ourselves and others seems…skewed. Basically, people are more often saying “Yeah, my political party is pretty moderate, but that other party- those are the crazies.” And the result? Extreme rhetoric over the years not only has sown close-mindedness, and even anger, but also has nearly shut down the federal government on more than one occasion. It has also spawned the presidential race we have today.

One of my favorite things about StreetLeverage is the value it places on self-discovery and self-awareness of who we are as whole people functioning within systems of power, and the responsibility each of us has individually to effect change. How does who we are influence where we are- as individuals, as a collective? Let’s look at the electoral landscape and apply the same principles StreetLeverage calls us to embody: introspection, engagement, and resolve.

In doing this research, I came across an article that said, “if you don’t like the person, vote for the issues.” It’s up to us as sign language interpreters to determine where our identity politics lead us. We need to be as diligent as we can in looking closely at these and other issues that will form our democracy for the next presidential term. If this election season feels like a Tilt-A-Whirl you didn’t even buy a ticket for, close your eyes, take a breath and vote on November 8. This ride is over soon, kids.