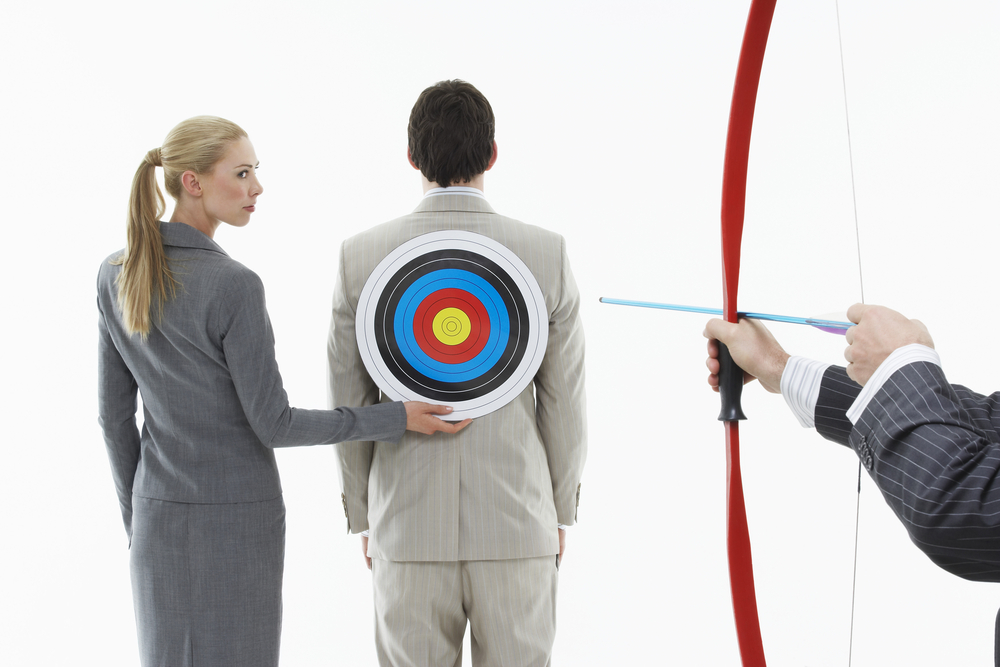 Many sign language interpreters follow an “unwritten rule” that prevents us from intervening when a colleague’s interpretation is insufficient. Our silence contributes to Deaf oppression – it’s time to speak up.

As I submit this, some time has passed since the incident of the “fake interpreter” at the memorial service for Nelson Mandela. While this was an event of historic proportions, it was not an event where the life, liberty, or future prospects of the participants were placed at particular risk. Do not misunderstand me – what happened was fundamentally wrong. Deaf people were excluded from sharing in the memory of a person who has had a profound impact upon the world that we all share, as highlighted by Brandon Arthur in his post, Nelson Mandela: Have Sign Language Interpreters Disappointed the World? It was a major injustice and it is upsetting to witness access being denied in such a way.

There are no two ways about it: the events at the memorial were appalling, yet, in some ways, the level of attention that this single incident has received is nothing short of amazing. On a daily basis, Deaf communities put great energy into the fight for equality, yet this particular incident seems to have captured the imaginations of many people. Here in Ireland, Deaf people and sign language interpreters took to social media to express their condemnation. Judging by the reactions of the more traditional media (in the English speaking world at least), there appeared to be some understanding of why this was wrong. It was a positive thing to see such an outcry about the inequalities that are faced by Deaf people, and hopefully this will become a turning point.

Having said that, something is not quite right.

Yet we should not allow the discussion to stop there. There is another issue that is arguably as disturbing: there are numerous anecdotal examples of qualified interpreters providing suboptimal interpretation, but the profession handles those events differently. The responses are often more subdued or fragmented than we have seen in the case of the memorial service.

Many of us are held back by the “unwritten rule” telling us not to get involved, not to draw attention to an interpretation that is not working. We have not been explicitly taught this during training – it is something that we learn. We learn it by watching Deaf people complain about sign language interpreters who do not understand them, or whom they cannot understand; we learn it by seeing how easily those complaints are deflected because the interpreter is qualified; we learn it when complaints are turned into issues about the personal preferences of Deaf people, rather than issues about the performances of the qualified interpreters.

Use of Credentials to Control

What we are actually learning is the power of credentials, and this is not something that is unique to the sign language interpreting profession. Charles Tilly, amongst others, has discussed how professionals use credentials to control entry into professions and, more importantly, to control and silence debate. The status of being qualified can supersede all other considerations, even taking away the right to ask questions of the professional. Indeed, at times, being qualified can even take the place of being competent.

In addition to raising awareness of the importance of qualified interpreters, the memorial service should also give interpreters something more to reflect on. If we step away from the fact that this person was unqualified, we can ask a more meaningful question: “what is the difference between someone who stands there making a series of gestures and a qualified interpreter whose interpretation Deaf people struggle to understand?”

For someone to purport to provide access when he or she is not an interpreter is foolhardy, disrespectful, and a gross insult to Deaf people – not to mention dangerous. When qualified sign language interpreters are involved and Deaf people struggle to understand the interpretation or make themselves understood, then we are in similar circumstances to those of the memorial service for Nelson Mandela; yet it is far easier for us to discuss the issue of the “fake interpreter,” as we are discussing an outsider.

There is one significant difference. The Deaf community has not invested in the “fake interpreter” and has not allowed him into their space. The betrayal is all the worse when qualified interpreters are involved.

In Ireland we are fortunate to have a Centre for Equality Studies, where an Equality Framework has been developed [Baker, Lynch, Cantillon and Walsh (2009) Equality: From Theory to Action]. The framework has five dimensions of equality:

The application of this framework to our work as sign language interpreters is far greater than can be discussed here, but just choosing some aspects of the framework can certainly give insight into our thinking. We can use it to analyze situations, and I intend to do this by sharing some reflections from personal experience.

I once attended an interpreted event with around ten off-duty interpreters present. Throughout the event, there were numerous instances in which the interpretation was not working well, with inputs from Deaf participants incorrectly or poorly translated into English.

At these times, there was discomfort, but no intervention: not from the other members of the interpreting team, not from the organizers, not from the audience. My discomfort came as a result of my position as a hearing person and as an interpreter. I was fully aware of what was happening, yet I chose not to act. I sat in uncomfortable silence hoping that the problem would be resolved.

At one point, I stood to make a comment. I chose to sign rather than speak. Afterwards, I realized that I had done something that I did not like: I had listened to the interpreter voicing my input, and I had modified my comment on the fly to correct the interpretation.

Even though I believe in equality, this was unegalitarian. I benefited from being a hearing person who could make sure that my message got across, even though the interpretation was not always working. Yet I was silent when it came to the other breakdowns.

In a room with almost 15% of the sign language interpreters in our country present, this was unfolding before our eyes – and we were letting it happen.

We were sitting back. I was sitting back. It went against everything I believe in, yet I was listening to the voice in my head saying, “Don’t say anything. Just be quiet. You’re not working here. It’s none of your business”. I decided to ignore that little voice and say something. It had happened too many times already without intervention. I clarified with the hearing presenter by standing and sharing my understanding of the question. I was left with a bigger question to deal with: “Why was it such a big deal to intervene?”

I appreciate that it is easier to be an observer than to be actively interpreting. We can analyze the decision-making processes of the working interpreters and try to understand what happened for them, but to do that is to miss the point. The focus should be on the rest of us and what was happening for us that led us to be complicit in those inequalities as we sat back and allowed them to occur.

I have asked myself why it took me so long to say something and I have rationalized it in any number of ways: “The interpreters will correct the issue themselves;” “The organizers will  intervene soon;” “Someone else will say something before me.” All of those explanations fail to get to the crux of the issue: why was I hoping that something would happen without having to act myself? The real reason is that I know the rules as well as anyone else. I am aware that speaking up is seen as an act of treachery against colleagues, and even as undermining the profession.

The power dimension of the Equality Framework is especially interesting here, at least for me. When witnessing the injustice of an incorrect interpretation, I allowed the power placed in an idea to hold me back from speaking up. This idea that has come from somewhere – it is an idea that serves some interests, just not the interests of equality or Deaf communities. Indeed, it doesn’t even serve the sign language interpreting profession, as it makes us question whether we should intervene when something blatantly wrong is happening. It confuses us into thinking that, by addressing a problem, we are causing a problem; yet these problems already exist. A wiser person than I refers to this type of situation as a case of the Emperor’s New Clothes: sign language interpreters can be in their “altogether” and be totally exposed. We can see it, but we cannot say anything for fear of how we will be perceived – after all, it is only a fool or a crank who does not recognize the credentials that we wear.

The love, care and solidarity dimension is also interesting as it is frequently misused to protect the status quo. In the example above, I had Deaf friends and colleagues who were having their ideas misrepresented and I was weighing what to do. While it is true that everyone deserves the benefit of love, care and solidarity, the unwritten rule is a distortion of what this should be. We are instilled with the idea of protecting and fostering a “safe space” for interpreters, but the safety of interpreters should lie in our competencies, not in the fear fellow interpreters have of speaking up. Perhaps there are interpreters who consider my intervention as oppressive of the interpreters working at the event. Well, my answer to that is simple: look at where the power lies and you will see where the oppression is coming from. Correcting an interpretation is not an oppressive act. The marginalization and misrepresentation of Deaf people is oppressive, and our complicity in situations like that makes oppressors of us all.

If there is one thing that we should take from the incident at the memorial service for Nelson Mandela, it is that real access is more than the appearance of access – qualified or not, the interpretation must be working. If we are equality-minded, “they are trying their best” is not good enough. The voices in our heads should be telling us to fix the situation, not stopping us from standing up. It is time to “rewrite” the unwritten rule.